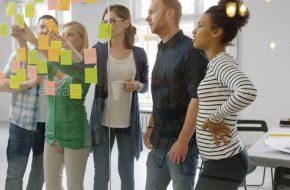 Imagine a blurry-eyed government employee just stepping off the Metro on their way into work. What images do you think that employee would conjure if you asked them about the culture of a typical West Coast tech startup? Now flip it. If you were to venture out to San Francisco or Seattle, how do you think the average techie would look at office culture of Federal Triangle? The Metro rider may offer you visions of a coffee-swigging, Prius-driving hipster, clad in $200 dollar jeans and sporting a pair of Birkenstocks. Our San Francisco-based startup employee would likely conjure a vision of a starched and buttoned up bureaucrat with no outlet for independent thinking.

Though it is difficult to generalize entire regions, there are numerous opinions on which environment is “better” or “worse.” Ok sure, but why does it matter? The answer is that the government needs more young tech talent. Across the Federal space, tech talent is getting older, with some government agencies experiencing a ratio of 19:1 in terms of IT talent over 60 compared with those under 30. Though this case (at the VA) is certainly on the extreme end, the same ratio at all civilian agencies was a little over 7:1, while all Federal agencies had a ratio of a just over 4:1, as of March of 2018. At the same time, just 17.4% of Federal employees were 34 or younger.

The fact is, the government needs more young talent, be it tech-based or otherwise. A skilled workforce is critical if the government is going to fulfill its many vital missions. Failure to replace retiring  workers could lead to a degradation of services, followed by a possible erosion of trust by the citizenry. Acquiring top-level talent is vital for any business or institution, but the stakes are especially high in D.C., as the United States faces growing competition with countries like China in the race developing tech such AI.

This brings us back to Millennials and workplace culture. Millennial Boss cites 5 characteristics that Millennials are looking for at work: Flexible work arrangements, more time with their manager, a reason “why,” fast career progression, and a social work environment. The problem is that the Federal bureaucracy isn’t always conducive to such an setup. Though telework is increasingly common among Feds, a fully-flexible telework environment is still rare in D.C. In addition, the nature of the top-down setup of the public sector often means that the type of collaboration with the boss and social work environment younger people are looking for is often not available.

How then to bring Millennials into the fold? The good news is that the Federal space has a number of advantages which should be promoted: First, Millennials value stability more than one might think. A CBRE study from 2016 found that fully 62% of Millennials wished to change jobs as infrequently as possible. In addition, Millennials are attracted to the idea of a meaningful job, that is, the work they feel they are actually making a difference in the “real world.” These are two characteristics that define the traditional federal experience, and should be marketed to Millennials accordingly.

What to do? One solution is to build a more solid funnel for younger people interested in government service. The U.K. has created a program called the Civil Service Fast Stream, designed for new grads who desire government employment. A more wide-ranging and robust apprenticeship program than America’s Pathways program, Civil Service Fast Stream has shown promising results; over one third of UK government employees are under 40. Communication is also critical. The majority of the slick ads that Millennials see from Federal agencies come in the form of recruiting pitches for the armed forces. Other agencies should follow the DoD’s lead, making opportunities known to young talent who reside outside the beltway. The 20-something computer scientist in San Jose sees startups spring up almost every day, while their only meaningful interaction with the Federal Government may be with the IRS come tax time.

Knowledge and perception matter. As a native of Seattle, your author’s conception of the D.C. culture was admittedly similar to that of our hypothetical San Francisco techie. Since residing in the Beltway, the nuances of Federal culture quickly became apparent, dispelling stereotypes of the starched bureaucrat. A prospective hire should have an easily accessible picture of the attractiveness of Federal employment, no matter where they live. Tackling this challenge should be a high priority for public sector recruiters of all stripes.