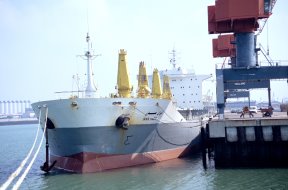 In 2008, the United States imposed strict sanctions on Iran’s principle international shipping organization, the Islamic Republic of Iran Shipping Lines (IRISL), due to its involvement in weapons trafficking. To circumvent these sanctions, IRISL developed a complex corporate shell structure around its ships to mask its shipping activities. Despite the best efforts of the U.S. Department of Treasury Office of Foreign Assets Control (OFAC), Iran has stayed one step ahead of the blacklist, spreading confusion throughout the public and private sectors in the US and abroad.

This demonstration uses open-source data from well-known media sources, including the New York Times, and showcases the power of combining open-source data methodologies of Kapow with the Palantir analytic platform. As a result, analysts identified key players in Iranian Shipping corporate shell structure through relational applications, tracked the Iranian fleet geospatially, and applied knowledge to a real-world problem.