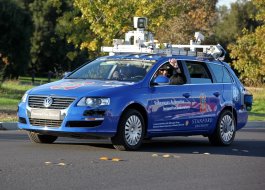 Driverless cars could completely transform the transportation sector in the coming years. Google first started designing the autonomous vehicles back in 2010, and since then, the cars have logged more than 400,000 test drive miles. The cars use artificial intelligence software capable of sensing nearby objects and making independent navigation decisions. In fact, driverless cars hold many benefits over human-driven cars. Robot drivers can react faster than humans since they have 360 degree perception and don’t text, drink, or fall asleep at the wheel. Self-driving cars are also more efficient; since they are able to self-manage their speed, the cars can drive at closer distances to one another without crashing, resulting in decreased maintenance and fuel costs. Additionally, because the autonomous vehicles are less likely to crash, automakers can design lighter cars, thereby further reducing fuel consumption.

According to Lisa Whalen, the Vice President of Automotive and Transportation Growth Consulting at Frost & Sullivan, the auto industry is going through major changes because of trends such as car-sharing, increased urbanization, and demand for integrating tech devices into consumer’s daily lives. “Those that will make the profits and capture the revenue opportunities will be those who can make the experience of mobility as happy and seamless as possible,” she adds. Tech-powered car services like Uber are making transportation easier for urban dwellers, and many young Americans are forgoing driving and car ownership entirely. Automakers and their tech partners are noticing this trend and have moved towards building their own driverless cars. After years of experimentation, the big automakers are slowly moving self-driving cars towards production. Mercedes-Benz has been testing an “Intelligent Drive” research vehicle that navigates autonomously using a system called the Route Pilot. Nissan is aiming to produce fully autonomous cars by 2020.

The carmakers are working closely with tech partners to make this happen. Mercedes’ tech supplier, Continental AG, is partnering with IBM to develop the technology needed to handle the large amounts of data required to keep a self-driving car safely on the road. Reports also suggest that Google could be an additional partner by providing maps and other content for the driving systems. Nokia is also reportedly allying with Mercedes to design 3D maps using Nokia’s Here, a cloud-based system that provides real-time traffic updates, information on road closures, and other locational data. The amount of data here could be huge since precise data on everything from lane width to road sign locations are critical to driverless car routing. Parking data is yet another crucial piece of information. Drivers today waste nearly 1 billion miles per year driving around searching for parking. Valeo, a French auto tech company, recently unveiled its “Park4U” system that allows owners the ability to drop off their cars in a parking lot and use their phones to direct the car to self-park itself. Streetline, a parking tech company, is currently helping to install censors in parking spots that would inform users where available spaces might be.

This innovative transformation of the transportation sector could improve efficiency, decrease the number of deaths from accidents, lessen the burden on the environment, as well as increase mobility for the elderly and disabled. Driverless cars could even spawn new business ideas, such as delivery services by driverless cabs. All of this will require close cooperation with tech partners and the ability to manage large amounts of data in streamlined networks.