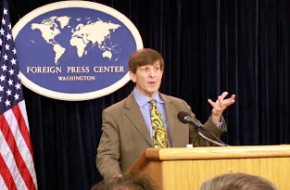 In February 2006, Allan Lichtman — a political scientist and professor at American University who specializes in predicting US presidential elections — surveyed the country’s political landscape, looking at a very particular set of issues from a narrow angle: pure performance, the only thing that influences voter decision. A year earlier, a contentious fight over right-to-die involving Terri Schiavo consumed Congress. The war in Iraq had been going poorly. The economy registered two consecutive quarters of growth below 3% for the first time in three years; consumption and job growth were slow; wages reached historic lows as a percentage of national income; home appreciation decreased; the trade deficit reached a point not seen since the Great Depression. And the performance of FEMA and the White House in New Orleans after Hurricane Katrina underwhelmed.

The election may have been more than two years away, but Lichtman was confident in his prediction: no matter who runs from either party, the Democrat will win. In an article in Foresight journal, Lichtman applied his read on the status of the incumbent and challenging party against his 13 Keys To The White House methodology. Each Key is a binary question, and if five or fewer keys go against the incumbent party, it wins another term in office. If it loses six or more, the challenging party wins. Keys are not weighted, so the model is self-adjusting. Further, the answers to one key (e.g. state of economy) could trigger another key (social unrest). As of February 2006, Republicans held an insufficient amount of Keys, and so, Lichtman predicted their electoral doom.

Most pundits make their predictions on public opinion, historic voting patterns of geographic areas and demographic groups, public response to campaign tactics, and the like. For Lichtman, this is like trying to predict tides based on the foam waves generate (it is the motion of the earth, the moon, and the sun that dictate tides). There are underlying, structural reasons why people vote the way they do, and campaign tactics, media coverage, and advertisements turn out to be irrelevant, as do political affiliations and ideology. What matters is pure political performance. To test his model, Lichtman studied every election between 1860 and 1980. Not only did they post hoc get each of those elections correctly, but they have predicted every election since they correctly as well.

Finding and processing the relevant data for any analytical question is almost always a challenge, and too often a constraint on the depth and quality of the output. In the world of information gathering and analysis we often look for indicators to clue us into realities we cannot experience first hand. As Lichtman demonstrates, at least in the United States, voters in 1860 voted based on performance just as we do today – times have not changed us. Whether it is analysis of education policy and the questions of performance pay and test scores, or national security analysis of overseas public diplomacy, or political analysis of foreign elections, identifying the underlying structures and basic performance of leadership will be vital.