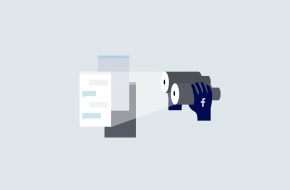 What would the world look like today without social media? With the growth of online networks, it has become normal for people to share intimate details of their everyday lives with the internet. There’s Twitter to send tweets, Instagram to post photos, Facebook to keep in touch with friends and family, LinkedIn to publish professional accomplishments, and more. No matter what a person wants to publicize, these outlets provide them with a place to do it. Social media has become a communication tool used daily by billions of people across the world.

Fifteen years ago, Mark Zuckerberg created Facebook, which has since become the world’s largest social network. Nearly one-third of the world’s population takes to Facebook to post everything from pictures of their pets to life milestones. But what does Facebook do with these massive amounts of personal data? Who has access to your data and what do they plan to do with it?

Every week, it seems like there’s a new Facebook privacy scandal making headlines. One of the most well-known stories went live during the 2016 Presidential election. Cambridge Analytica was hired by President Trump’s election campaign team in 2016 with the promise of  tools that could target and influence American voters. Behind the scenes, the political consulting firm gained access to the private information of more than 50 million users. They planned to create tailored ads towards certain personality types by employing users identities, networks and likes. Facebook’s response? They claimed the incident was not a hack as the platform routinely gives researchers access to user data for academic purposes, which users agree to when creating an account. That being said, the use of data to create advertisements was in fact a violation of Facebook’s policies.

The company’s most recent scandal has come to light in the past couple of weeks. For the past three years, Facebook has been paying consumers ages thirteen to thirty-five to install a “Facebook Research” VPN which grants Facebook unlimited access to a user’s device. Once the users agree to install a root certificate, Facebook can access what apps a person has been using, how frequently they use different features, their browsing history, private messages, emails, and even location data. It is still unclear which data sets the company was after, but they could see virtually everything. The Apple App Store as well as the Google Play Store have strict rules against apps that give developers this level of access to a user’s personal data, but Facebook was able to circumvent restrictions by having users download the app through internet browsers rather than the stores. Thanks to TechCrunch’s reporting on the privacy violation, Apple and Google have since banned the app.

With all of these scandals, why don’t people stop using Facebook? It seems like the vast majority of users are impartial to social media networks eager to profit from details of their private lives. In fact, Facebook resiliently bounces back scandal after scandal, and remains successful despite the unending stream of bad press. Some argue that this is due to lack of information in the hands of the public. If they knew what these companies were doing with their data, they would certainly opt for comparable platforms with higher privacy standards. But others disagree. While there are social media alternatives out there, they charge usage fees to ensure data protection and generally have a much smaller number of overall profiles. The consensus is that people would rather choose “free with surveillance over paid with privacy.” Users always have the option to leave, yet they simply decide not to.

There is no end in sight in terms of tech giant privacy scandals, and with consumers failing to remove themselves from the platform, many privacy advocates have turned to Congress. Historically, Washington has left the tech industry alone hoping that the hands-off approach would allow for economic innovation. However, many are now arguing that the data sharing has spun out of control, to the point where the government must take a stance. A former Facebook employee even said, “Lawmakers shouldn’t allow Facebook to regulate itself. Because it won’t.”

As the war on privacy continues, it will be interesting to see whether Congress can secure  bipartisan support for data privacy legislation. If there is anything the general public can learn from recent headlines, it’s to take a second look at your privacy settings online. You never know where your data may end up.