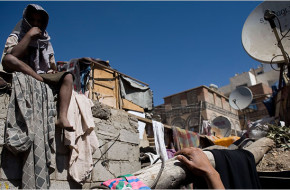 Endemic conflict and the lack of good governance has produced a humanitarian crisis in Yemen, where basic services are not being provided to the country’s population. 5 million Yemenis are in need of emergency aid, rising food prices are pushing more and more Yemeni families to the brink of desperation, and the country is quickly running out of water. Hunger rates have doubled in the last two years, and half of the population is malnourished. Additionally, nearly half of Yemen’s population lives on less than $2 per day and unemployment remains as high as 40%. The fact that 50% of the country’s agricultural water goes towards the cultivation of qat, a narcotic drug pervasive in Yemeni society, rather than towards increasing the country’s food security does not help matters. Yemen also has about 550,000 internally disposed persons resulting from conflict.

What can be done about this dire situation? The US government plans to donate $337 million in fiscal year 2012—the largest amount to date—to Yemen, with more than half of this going to political transition, humanitarian assistance, and development. John Brennan, Assistant to the President for Homeland Security and Counterterrorism, has said that $68 million of this aid will go towards improving the delivery of basic services, including health, education, and water. However, to make the most effective use of this aid, emphasis should also be placed on combating corruption within the Yemeni government so that donor money is not simply siphoned off to private interests within the Yemeni leadership at the expense of actually helping the average Yemeni. International aid can only do so much until Yemen’s leaders are willing to put the public good over private interests or until the country has functioning institutions in place which will push them in that direction.

An added problem is that the Yemeni government is entirely absent from parts of the country, allowing room for nefarious characters, including some militant jihadist groups such as Al Qaeda offshoot Ansar al-Sharia to move into these “spaces of disorder.” For example, some militants in the southern part of the country have been doling out basic services that the unresponsive and ineffective state has failed to provide, which could attract more Yemenis to join their jihadist cause. Ansar al-Sharia has stated that it is attempting to instill sharia rule—modeled on the Taliban’s regime in Afghanistan—in the parts of Yemen under its control. In other words, the security situation and the humanitarian crisis are symbiotic; by ignoring the need to look after its people, the Yemeni government risks giving room for militant jihadists to step in and win favor with the populace, potentially winning more recruits.

The Yemeni government’s lack of commitment to mitigating the humanitarian crisis at home makes it difficult for outside actors to work effectively in the country. Combating corruption within the Yemeni leadership, building schools and human capital, and establishing a rule of law are challenging in the midst of political transition and ongoing conflict, but necessary steps that need to be taken in order to pave the long road ahead towards a better future for the Yemeni people.