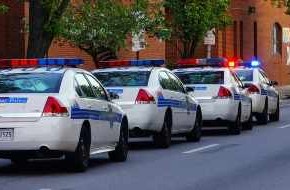 Praescient has a long history of providing support to the law enforcement community at both the federal and local levels. Our team works in close collaboration with analysts, investigators, and officers to implement powerful software solutions and develop new workflows. For this edition of Praescient’s Employee Spotlight, we’re featuring Eric Lindsoe, an Analyst Consultant working out in the Midwest to support coordinated efforts between several law enforcement organizations to halt drug trafficking and investigate money laundering.

CHARLOTTE: Like many Praescient team members, you began your career as a military intelligence analyst. How do you translate the skills you learned in the Army to the law enforcement realm?

ERIC: What I’ve had to do, because I’m from a military background, is basically learn to speak a different language. I have to really sit down and listen to the law enforcement people and not so much direct training as adapt it to a totally different workflow. There is of course a slight learning curve, but these guys are very adaptable. Much like the military with infantry and combat arms, intel work wasn’t traditionally seen as important as operations. In the past 10 years, in both the military and law enforcement, intel has come to be thought of as a partner to the operations process rather than just an arm of support.

Getting these law enforcement folks to realize that if it takes a few extra seconds to be more specific in what they want to see on an analysis platform it can really help them later on in putting together criminal networks. So it’s not going immediately for an action, but seeing how the whole picture develops. It’s really about taking in all the information in a given situation, even when it might seem like something is inconsequential.

A case in point was an interdiction stop that I rode along with the Nebraska State Police in a mentorship role. An individual we pulled over in a traffic stop claimed that he had driven out to Denver and was coming back directly from seeing a family member and went no place else. However, we had found a receipt in his front seat that had placed him in Oregon the day before. So it’s those little things – so called “ash and trash.” It really comes in handy when you’re trying to validate someone’s story. This carries over to how we look at data, I look at it as everything is part of a puzzle.

C: Much of your work involves supporting joint efforts between law enforcement agencies to investigate and police High Intensity Drug Trafficking Areas (HIDTA). What have you seen in terms of interagency cooperation?

E: The whole HIDTA concept is supposed to cover the nation, but each agency also has to abide by state regulations and laws. So there ended up being a lot of pockets, like Kansas City, Chicago, and Lake County, Indiana without a collaborative atmosphere. But now that they have the analysis software Praescient has been able to implement, they’ve been given this tool that allows them to share information or leads across jurisdictions. This means I travel quite a bit to support these different organizations – I’m typically on the road three weeks out of the month.

Officers and troopers in the field can use mobile technology to instantly add relevant data to an investigation.

To get into it a bit further, it is important to remember that there is a difference between the federal level of law enforcement (like customs, FBI, and border control) and state and local agencies (like state troopers and local sheriff’s offices). Due to some of the regulations that are in place, personnel in one agency might not be able to see information put into the analysis platform by a person at another agency. Now, the technology is allowing us to start to shift to a sharing atmosphere, where a state-by-state pipeline can move relevant data between both federal and local organizations.

C: A big part of your job is helping investigators and other law enforcement personnel make the most out of the mobile capabilities of the analysis platform. What are some of the advantages of having such a capability in the field?

E: As far as the mobile capabilities, the thing I hear about most is the “blue force” tracker capability. This allows them to have situational awareness of where their agents or officers are at all times. And these guys on the ground have the ability to be connected to the software tool and track and pursue tons of targets and hundreds of thousands of dollars of laundered money. They’ve texted and communicated with me in real time as the investigations are going on and I see how useful the mobile capabilities can be. They’re able to get everything they find into the platform through mobile and this allows the analysts back at HQ to immediately integrate that data into an investigation. And it works in the other direction as well – the analysts can talk in real time to the trooper on the ground and provide things like criminal histories and driving records very quickly.

The funny thing is that when these folks on the ground start seeing all the capabilities that mobile can bring they get really into it and start entering tons of stuff into the platform remotely. Sometimes I have to pull back the reigns a bit and remind them that they are not analysts standing there on the side of the road!

C: How have you seen the support you provide translate into real world impact?

E: The increased collaboration and information sharing that the technology brings has really led to successes for these law enforcement agencies. I’ve been on a ride-along where we apprehended $250,000 of laundered funds and it was all due to the help from another law enforcement organization in a totally different state giving us a heads up to be on the look out for a specific vehicle. This wouldn’t have happened if we didn’t have the power of the software to easily share data.

Although we’re looking to stop narcotics trafficking, in my experience it is really about the money laundering. I’ve helped to bring an understanding to the agencies that all the illegal activity really stems from the movement of money. If you can turn off the tap on the money, the rest of any criminal organization will crumble.

C: To many, you’re known as “The Bull.” Where did you get the nickname? 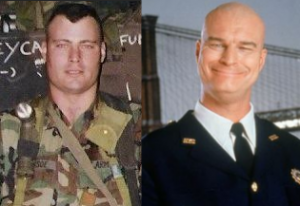 Eric (AKA “The Bull”) back in his Army days. Just imagine a little off the top and the resemblance is uncanny!

E: Oh boy…well, long story short, back during my second tour in Korea a buddy of mine’s son was born while we were overseas. Since they were both bald, some of us decided to shave our heads as a way of saying congrats. Well, the next day I found out that I had to give an intel briefing the leadership. So I had to stand tall in front of the commanding general in the middle of a Korean winter. I had my cap on to cover up my head and finally the general told me: “Sergeant Lindsoe, take off that watch cap.” He looked over at the Sergeant Major and said that I looked like Bull from Night Court. So the nickname started right there.

Thanks for checking out this edition of our Employee Spotlight! Check back soon to meet another talented Praescient team member.