Analysis of Conflict in Mozambique with GbHawk

Analysis of Conflict in Mozambique with GbHawk 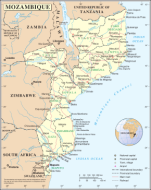 We are pleased to announce Praescient’s Analytic’s partnership with GbHawk and our joint analysis of the recent resurgence of civil conflict in Mozambique and its potential to destabilize Southeastern Africa. Understanding the socio-political context of this conflict is the vital first step to diffusing it, before it can disrupt Mozambique’s emergence from extreme poverty underpinned by its vast natural resource wealth, and its ongoing recovery from a brutal 15-year civil war which ended in 1992 and cost around one million lives. 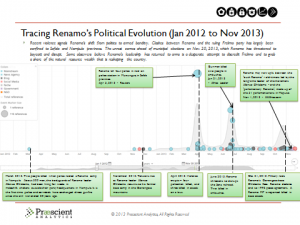 Tracking the evolution of RENAMO, a political party in Mozambique. Click for an expanded view.

Praescient analysts leveraged advanced open source analytic tools to augment GbHawk’s Socio-Cultural Analysis (SCA) Division’s on-the-ground tracking of the RENAMO party’s abandonment of the political process and its return to armed conflict with its rival, FRELIMO, which has dominated the government of Mozambique since the end of the civil war. We also analyzed open source traditional and social media indicators of RENAMO’s exploitation of local populations’ grievances against both the FRELIMO-led government and foreign multinational companies operating in the country to build support for their movement.

One of the most salient grievances among rural population of Mozambique is their forced resettlement to make way for natural resource extraction by foreign multinational companies. In several cases in the last few years, farming communities in Mozambique’s coal-rich Tete province have been resettled to substandard company-built villages on infertile land, prompting hundreds to protest and even temporarily shut down mining operations by companies such as Rio Tinto. The prospect of more communities having to be resettled from northeastern coast of Cabo Delgado – where the country’s LNG processing facilities are expected to become operational in the next few years – makes it absolutely vital for extractive companies to “get it right” when engaging with local communities from the beginning to the end of a project life cycle. 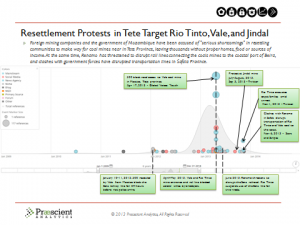 A time line analysis of resettlement protests in Mozambique. Click for an expanded view.

GbHawk and Praescient Analytics’s combined socio-cultural analysis offering enhances companies’ traditional physical and technical security methods by helping them to interact with local communities in accordance with their unique needs and cultural norms, while simultaneously monitoring open source indicators of risk to address grievances before they spiral out of control. This approach mitigates the risk of conflict between company and community, and reduces populations’ vulnerability to recruitment by groups like RENAMO.