Enabling and Resourcing a ‘Smart Power’ Strategy for National Security

Enabling and Resourcing a ‘Smart Power’ Strategy for National Security 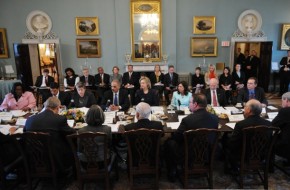 As recent events across the Middle East and North Africa have shown, the nature of the global system is in a state of flux.  Two critical trends, power diffusion and power transition, are reshaping the manner in which actors around the world interact and redefining the nature of geopolitical relationships. In particular, the role of the U.S. as the most dominant power in the system is evolving and in many cases being challenged.  Joseph Nye succinctly describes this system as a “complex three-dimensional chess game” with several layers of power interactions happening simultaneously.   On the top level, defined by military power, the U.S. is the clear global hegemon, with a high likelihood to “remain supreme for some time.”   One level below, where economic power is considered, the system is multipolar and has been for over a decade.  In this realm, the U.S. is challenged by Europe, Japan, and China, with several others rapidly gaining influence.  On the bottom level, the realm of transnational relations, power is “widely diffused” among a myriad of non-state actors including corporations, political groups, hackers, and terrorists.

Over the last several decades, the importance of the second and third levels of the system has risen significantly, resulting in an overall decrease in the relative power of the U.S. within the global order. As a recent estimate from the National Intelligence Council

suggests, “the international system…will be almost unrecognizable by 2025 owing to the rise of emerging powers, a globalizing economy, an historic transfer of relative wealth and economic power from West to East, and the growing influence of nonstate actors.”   All of these trends point toward the likelihood that the U.S. will become a significantly “less dominant” power in the system.   This begs an important question: how should the U.S. respond to these changes in order to remain a leading power in a relatively peaceful and prosperous global order?

Ultimately, the U.S. must recognize the complex interplay between the three levels of the global chessboard and develop a more nuanced strategy grounded in ‘smart power’ that allows us to maintain a relative advantage by engaging across all three levels using a variety of means. Nye correctly argues that the best way to do this is through a coherent ‘smart power’ strategy, which combines “the hard power of coercion and payment with the soft power of persuasion and attraction.”  The U.S. must develop a robust set of capabilities – including defense, diplomacy, and development – that can be used in combination to advance our national interests around the globe. Former U.S. Secretary of State Hillary Clinton has repeatedly advocated such a strategy, arguing in July 2012 that, “It is no longer enough to be strong. Great powers also have to be savvy and persuasive…to do that we need to expand our foreign policy toolbox.”  In 2007, Robert Gates, former U.S. Secretary of Defense similarly argued, “I am here to make the case for strengthening our capacity to use soft power and for better integrating it with hard power.”

A recent op-ed by General Dave Petraeus and Mike O’Hanlon also echoed these recommendations, arguing that any further budget cuts for State and USAID would, “be bad for our nation’s security.”  Outlining several ‘high-payoff’ foreign aid projects that are likely to arise in the coming years – including a deal to help Egypt’s new government through its current economic challenges, a possible proposal to help Pakistan reinvigorate its energy sector, and much-needed aid for transitional governments in Libya, Yemen, Mali, and perhaps Syria – Petraeus and O’Hanlon make a compelling case that U.S. national security could be significantly improved with smartly crafted, yet relatively modest investments in international aid.

Although the Obama administration has made small increases in the budget for State and USAID, this is not nearly enough.  Instead, we must follow Clinton’s advice and “fundamentally change the way we do business” – designing a ‘smart power’ approach and realigning agencies, budgets, and resources to execute it. The U.S. must reexamine the fundamental balance between our funding for hard and soft power capabilities as well as our ability to effectively integrate these capabilities, moving beyond the outdated and overly bureaucratic paradigm established under the National Security Act of 1947. As the nature of the international order continues to transform, the U.S. must develop and effectively execute a ‘smart power’ strategy – or risk losing our place as the leading power in a global order that is prosperous and peaceful.