Not All Washed Up: The History Behind Team Kopána

Not All Washed Up: The History Behind Team Kopána 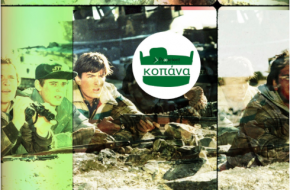 The Greek word “κοπάνα” (kopána) translates to “washtub” in English, and though you might not know it, this word is a core part of the internship experience at Praescient Analytics.

During the Cold War, specifically in the 1950s, a top secret joint operation between the United States Air Force and the Federal Bureau of Investigation called “Operation Washtub”  was launched in order to counter potential Soviet espionage and invasion in the then Territory of Alaska. The mission focused on the training of local citizens to act as stay-behind agents (SBA) to gather intelligence and support US military personnel. The mission ended in 1959 with Alaska being granted statehood, but the impacts of the mission are lasting, particularly here at Praescient. How so?

The USSR obviously never invaded Alaska, but other aspects of the mission were considered a success. According to Deborah Kidwell, official historian of the Air Force Office of Special Investigations (OSI), “While war with the Soviet Union did not come to Alaska, OSI trained 89 SBA, and the survival caches served peacetime purposes for many years to come.” Additionally, the mission further reinforced the idea that under extreme circumstances and with limited knowledge and capabilities, resourceful people with the right know-how can create powerful, actionable intelligence material.

Interns at Praescient Analytics, whether they are a part of the Intel Cell, Special Projects team, or Executive Support team, are expected to provide quality deliverables and results despite imperfect information or constricted timeframes. Given the company name’s etymology and military origin aspects, Katie Crotty (Praescient’s CEO) saw fit to dub the intern program “Team Kopána” in light of these expectations and the washtub motif of the OSI mission.

Praescient provides interns with the necessary tools to meet this mission directive, whether these tools be technology or soft skill oriented. For instance, members of the Intel Cell are trained to proficiency with ubiquitous technology tools such as IBM i2 Analyst’s Notebook and ESRI ArcGIS in order to facilitate their open source intelligence investigations. They also receive constructive feedback on presentation and writing ability, improving future performance. Special Projects gains familiarity with federal contracting channels, such as the GSA’s new System for Award Management and CJIS repositories, directly supporting business development initiatives in the federal space. This training allows Team Kopána to act independently of executive staff to complete their mission, not unlike the SBA of their namesake.

With Praescient’s innovative training program and real-world mission orientation, our group of interns from diverse intellectual and geographic backgrounds have learned to leverage their individual skills in support of the collective intelligence directive. Though they are not fighting Soviet influence in the far reaches of the frozen north, Team Kopána keeps this spirit of perseverance in the face of adversity alive through its active support of the intelligence community.