The following post is the second in a series of reflections from Praescient team members on their time in Oklahoma supporting the relief efforts of Team Rubicon, and is provided by Mike Doyle, an Analyst Consultant for Praescient.

Working with Team Rubicon to support relief efforts in Central Oklahoma after devastating tornadoes swept the area was one of the most rewarding experiences I have had in my professional career. It was a particular honor to work alongside Team Rubicon, a volunteer organization comprised mostly of US military veterans. It was amazing to see how the organization’s volunteers were able to bring their battlefield-honed skills to bear on a disaster affected area. Team Rubicon was clearly one of the best organized and most skilled organizations operating in the area. In fact, it was a common observation that veterans are uniquely equipped for post-disaster relief operations. 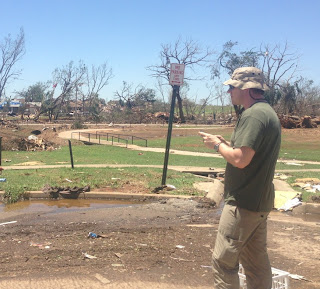 It was surprising to see this same intelligence-operations cycle again at work in disaster relief efforts in Oklahoma. As Team Rubicon developed more familiarity with the affected area, they devoted less effort to assessing and analyzing damage and more efforts towards cleanup and reconstruction. After these operations were completed, Team Rubicon switched gears back again and put more effort towards collection and analysis in order to drive future operations. What was remarkable to me was that these transitions happened seamlessly- as they would in any well-trained military unit.

While my experience in Oklahoma was rewarding for many different reasons, the thing I remember most is how quickly lessons from the military were adapted to tackle varied and disparate challenges. Since leaving the Marine Corps, I have repeatedly been reminded of how well my military experience has prepared me for life’s challenges. Disaster relief in Oklahoma has just been the most recent one.