In the wake of the devastating tornadoes that struck Oklahoma this May, several Praescient team members deployed to Moore, Oklahoma to support the relief efforts of Team Rubicon (TR), a non-governmental organization comprised of military veterans and medical professionals dedicated to disaster relief.  Team Rubicon mobilized volunteers from across the country who rapidly deployed to Oklahoma. Praescient team members assisted strike teams in the community, going home to home using mobile technology to provide damage assessments and expedite repairs. The following post is the first in a series of reflections from Praescient team members on their time in Oklahoma, and is provided by Tim Page, an Analyst Consultant for Praescient. 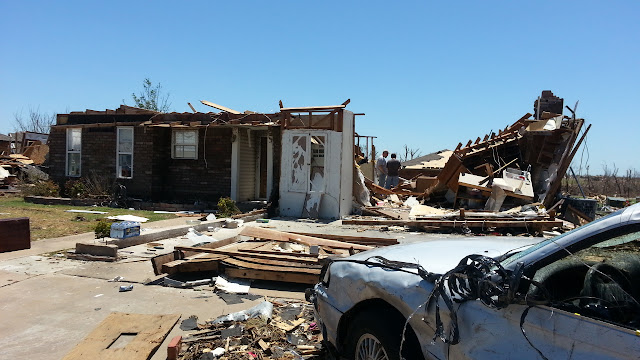 Shortly after the first tornado hit, I was asked to help support Team Rubicon in Oklahoma, and quickly accepted the honor.  I arrived in the evening on the 30th of May and sat down with fellow Praescient team members Nick Karnaze and Mike Doyle, who introduced me to the procedures developed to support the relief operation in Moore, OK.  They had both arrived on Memorial Day and already had some great insight on the mission.  The next day, I was fortunate enough to go through the step-by-step process of the workflow that the team had built and made some minor changes that allowed the coordinators to better understand how to best use the technology in the field. The volunteers quickly grasped the utility of the software platform, and were soon briefing team leaders prior to field operations, showing them how to use the mobile system and how to properly input data.

On the 1st of June, the morning after another wave of tornadoes swept through Moore, I set out with a few TR volunteers to see how we could further support the mission.  I had the opportunity to talk to an Army veteran who had lost his house.  He showed me the interior closet where his wife had braved the tornado alone while he was working at Tinker Air Force Base.  It still had pillows and blankets that she had brought in.  This closet and one other interior wall were the only parts of the house still standing after the disaster.  This man had lost everything, but as he removed the new tires from his otherwise destroyed Jeep, he stated, “We will rebuild, this is our home.”  This is just one of the amazing stories I was told.

I returned home to Colorado on the evening of June 3rd with a different sense of the disaster.  I did not live through it, but was there in the aftermath and witnessed the destruction that Mother Nature can bring to a community, but more importantly how a community can and always will always come back.