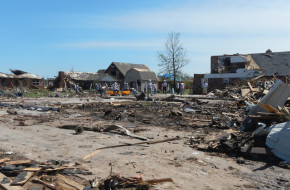 The following post is the third in a series of reflections from Praescient team members on their time in Oklahoma supporting the relief efforts of Team Rubicon, and is provided by Nick Karnaze, an Analyst Consultant for Praescient.

On Memorial Day, Praescient analyst Mike Doyle and I flew from Washington, DC to Oklahoma City to aid with disaster relief and recovery operations in tornado-ravaged Moore, Oklahoma. Fellow analyst Tim Page joined us shortly thereafter. We embedded with Team Rubicon, an amazing non-profit composed of military veterans and first responders. I am a huge supporter of this organization for two reasons; first, they provide teams of highly skilled personnel who can rapidly respond to natural disasters across the United States. Second, they give veterans a way to continue serving even after they take off the uniform. The week I spent in Moore was an incredibly eye-opening experience – read on for just a few examples of the amazing work that my team and I saw on our trip.

On Friday morning, conditions were right for super cell activity west of Oklahoma City. Meteorologists warned that this system would produce tornadic activity.  As the cell moved in a northeasterly direction, concerns grew that the system would erupt near Oklahoma City. Because of this, all Strike Teams were pulled from the disaster zone at 2pm. Around 6pm local, the first tornadoes began to form and touch down west of the city. As the evening progressed, one of the tornadoes was predicted to pass right over our hotel. While these tornadoes were not as powerful as the F5 that obliterated parts of Moore, they were “rain wrapped” – meaning that bands of rain made it impossible to see the funnel until it is on top of you.

Multiple tornado warnings popped around the city. My location was at the convergence of three tornado-warning areas. I normally love a good storm, but after working in areas of complete devastation over the past few days, I had no desire to meet the force of nature that brought me to The Sooner State.


As the storm moved closer, we were all evacuated to the ground floor of the hotel. Standing outside, we heard what sounded like a freight train in the distance — a constant rumble periodically interrupted by the howl of tornado warning sirens. We watched the storm roll in from the west and, over the course of 20 minutes, the sky blackened and a blue/green light that emerged in the center of a forming vortex. The storm sirens let out a bone-chilling cry that compelled us to retreat into the hotel lobby…with the rumble growing ever louder behind us.

While most neighborhoods were equipped with storm shelters, our hotel was not. We had two windowless rooms on the ground floor: the bathroom and laundry room.  We filled both rooms with the women and children. Once safely in the rooms, we covered them with blankets and mattresses. Securing the doors, the men crouched in the hallways of the first floor, the windows covered with guest room mattresses.

The building shook as the rumble grew to a roar, and the hotel suddenly went dark. My team quickly switched on the headlamps and flashlights we had brought with us. We had been relying on CNN to track the tornado, but without power, we were blind. Thankfully, my dear friend Melanie McCall  was providing real-time updates via Facebook Messenger (thank you Mel).  The shaking intensified and windows began to blow out. I recall being overwhelmed with the sound of shattering glass mixed with the children’s screams. Then, it all went quiet.

We released a collective sigh of relief.

We began to assess the damage. Thankfully, the actual tornado passed two blocks from us. The powerful funnel demolished a gas station, but left the group relatively unharmed.

The rain continued well into the night. Roads flooded and Team Rubicon went on standby for Search and Rescue (SAR) missions. Fortunately, our services were not needed.

All together, the storm system produced 17 tornadoes. 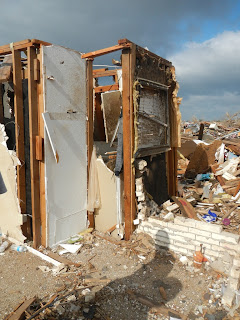 On Friday and Saturday, I ventured into the disaster zones. I was with a Heavy Team equipped with chainsaws and bulldozers. Our mission that day was to demolish and clear two homes totaled by the first storm. In both cases, the insurance companies determined that the houses had to be taken down. The first home was rented by a family with a small child who attended Plaza Towers Elementary, where seven children had lost their lives. The family wanted nothing salvaged, but did ask us to keep an eye open for the wife’s wedding ring. She lost it in the bathroom as the storm ripped their home apart. Incredibly, the bathroom was the only part of her home left standing.

In the rubble, I found one of the child’s dolls in brand new condition. Across the yard, I saw a stroller hanging from a twisted piece of metal lodged in a tree. Surreal. 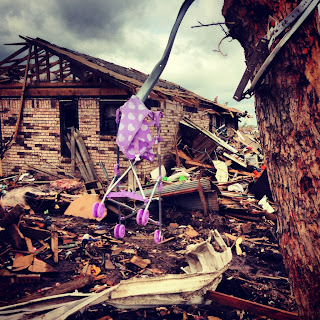 Following that job, we went to pay our respects at Plaza Towers Elementary. We met up with some American Red Cross Disaster Team members whose service in the the wars in Iraq and Afghanistan had prepared them well for this mission. They came ready with service dogs specializing in treating PTSD. These dogs normally comfort war fighters, but brought peace to victims and relief workers alike during this tough time. I spent a solid ten minutes with Cooper, a flirtatious 7 year-old Golden Retriever.

Given the traumatic nature of this event, we collected the information of the mental health workers and counselors that were ready to provide support services to victims. One of the amazing things about Team Rubicon is that we are all veterans and most, if not all of us, have seen combat. We know the value of talking things out following a traumatic event. When we engaged people, we always ended up talking about how they are feeling. As the conversation drew to an end, we informed them that counseling services were available free of charge.

My experiences in Moore reminded me of something I like to call the “Newsstand Paradigm.” While in the Anchorage Airport on my way to an Alaskan mountaineering expedition, I happened to pass a newsstand full of Us Weekly, People, and other gossip magazines. They caught my attention and I was momentarily distracted. A curious thing happened upon my return to the airport after a month of dodging avalanches, navigating snow covered crevasses, and enduring sub zero temperatures: when I passed that same newsstand, I looked at the headlines and was disgusted that that I once cared about such superficial things. My adventure in Alaska, and more recently, my time in Moore helped me to realize the value of extreme situations; they force you to reassess your priorities and decide who and what is truly important. When we find ourselves drifting back to that vapid newsstand, it is important that we remember how to walk away.

In the words of an amazing man I met this week: “You only get one life. Find purpose.”