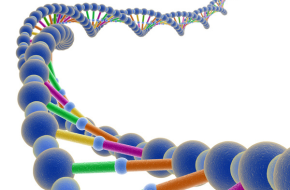 In 1990, the U.S. Department of Energy and the National Institutes of Health teamed up to begin what would be referred to as the Human Genome Project (HGP), an international research effort to sequence and map all of the genes of our species. Completed in April 2003 with a cost of over 3 billion dollars, the HGP gave us the ability to read and understand the complete genetic blueprint for a human being. This has lead to profound implications for a multitude of scientific disciplines, from evolution to neuroscience and fostered the development of new medical applications.  Advances in technology since the completion of the Project have enabled this work to proceed at an exponential rate.  According to Richard Resnick, CEO of GenomeQuest and a member of the HGP at MIT, the price to sequence a base of the human genome has fallen 100 million times.  This increase in technology and decrease in cost has led us to the precipice of a genomic revolution in which individual lives will be touched by the success of the project.

If these trends continue at their current pace, in just a few short years genomic testing will become commonplace.   Recent estimates of how much this technology could increase human longevity currently range from five to twenty years, and there is potential for vast quality of life improvement for those suffering from genetic disorders, such as Huntington’s disease, Alzheimer’s and various forms of cancer.  Correct diagnosis of such disorders via gene testing is now enabling personalized treatments for patients, and while prohibitive cost has restricted widespread use, we are rapidly approaching a time in which this will no longer be the case. In the commercial realm, versions of gene tests are being created at an unprecedented pace.  Want to know what percentage Irish you are?  Or if your partner is genetically pre-disposed to cheating?  The tests for these already exist and are quickly making their way to your local family doctor.>Along with the benefits to medicine and science as a whole, this exponential growth rate has brought to the fore a variety of ethical considerations. Some insurance providers have already begun to ask beneficiaries if they have received genetic testing on enrollment forms, and if so, asking for disclosure of the results.  This has led some to argue that genetic testing will deliver the world its next form of discrimination. To combat these concerns, in 2008, Congress passed the Genetic Information Nondiscrimination Act, prohibiting U.S. insurance companies and employers from discriminating on the basis of information derived by genetic tests.  And yet, the question is still being asked.  Disclosure of genomic information into the world’s legal systems and recognition of a person’s rights over his or her genome are also currently being debated in the scientific and legal communities.  A fine line must be drawn, and as Resnick suggests, “it’s up to us to wield the power for good or not.”

So what does this project mean for us going forward? Genes make up who we are.   From hair color to personality to the diseases and disorders affecting us as humans, genes are writing our life stories.  The Human Genome Project has given us the ability to read these stories and use them to determine new therapeutic procedures for the benefit of all.  And while there are still lingering ethical and legal issues that must be resolved to make mass genotyping of individuals acceptable, we are rapidly approaching the time where these genomic discoveries will make a profound and lasting effect on humankind.  Welcome to the revolution.