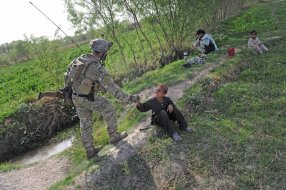 The U.S. Special Operations Command’s (SOCOM) initiative to embed special operations teams in contested villages across Afghanistan is proving to be one of the most effective engagement methods currently employed in theater. Village Stability Operations (VSO) place highly trained Special Operations Forces (SOF) units in rural villages to live and work amongst the villagers and advance stability in the region. A major component of VSO is the selection and training of local villagers who will compose a local defense force. Formally referred to as Afghan Local Police (ALP), members – who represent an ethnic and tribal cross-section of the local populace – are hand selected and vetted by village elders to provide security for their villages and defend against insurgent elements.

While VSO and ALP are making marked security gains, they can be doing more to promote sustainable local and regional stability. When a VSO site is first established, the vast majority of SOF efforts are directed toward understanding the threat while simultaneously training the ALP force. Over time, units conducting VSO find themselves in a unique position to expand their involvement with the local populous from one purely of security, to one of village growth and economic development.
The Commander’s Emergency Response Program (CERP) is the military’s response to the need for quick impact humanitarian and small-scale development projects. The majority of CERP projects do not actually support economic growth. Instead, most CERP projects are simple and short lived such as hiring a group of local workers to clean debris from irrigation canals or building retaining walls. While these are of value to local residents, their impact is fleeting. SOF teams are in a unique position to truly understand the needs of their villages. As their knowledge of local economics grow, they can use that knowledge to design projects that will have a lasting impact on the local economy.
Taking an example from the field.

A newly formed VSO site in northwestern Afghanistan quickly realized the majority of insurgents encountered were not hardened Taliban, but instead local residents who were being paid by the Taliban to fire a few rounds at coalition forces. Meeting with village elders, the team learned that their village used to be an agricultural hub for the region. Years of war had isolated the village from the surrounding area and the one road leading out of the valley had eroded to the point of impassibility. Working with local leadership, the team developed a plan incorporating a road refurbishment and a micro grant initiative to support local entrepreneurs and small businesses. During the micro grant application process, the team learned of a number of small businesses that were selling goods below the average market rate. The team reached out to the U.S. Department of Agriculture (USDA) representative and worked toward establishing an agriculture extension office to provide “best practice” farming techniques and to keep locals informed of current commodity prices.

The road project employed over 300 locals and provided basic skills training in road construction. The road also connected two markets that had been disconnected for the past 5 years and subsequently opened the VSO village to the rest of the province. With the renewed connection between villages came increased in regional travelers, which in turn created higher demand for local services leading to an increase in local job creation. It also allowed for local farmers to more efficiently export their crops to regional markets and allowed them to receive fair prices for their commodities.

Coalition Forces have mastered the ability to fully analyze and dissect local insurgent networks while taking into account second and third order effects. A deliberate mindset needs to be applied toward understanding and subsequently promoting local economies, especially in high-risk environments such as Afghanistan, in order to advance security and provide avenues of localized economic growth programs.