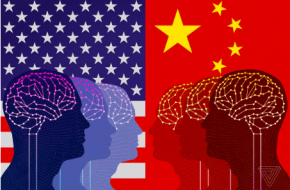 Whereas Russia and the United States (U.S.) competed in a traditional arms race through the Cold War, we are now observing a new combative arena where the U.S. government intends to compete with China in the advancement of Industrial Artificial Intelligence (IAI): a new arms race. IAI is defined as a government’s motivation to economically invest and advance the commercialization of artificial intelligence within its society. This new arms race may be on the way after U.S. Senators Martin Heinrich (D-NM) and Rob Portman (R-OH) proposed the Artificial Intelligence Act. Believing that Chinese progression in AI technology may soon surpass and threaten American capabilities, the Act calls for a $2.2 billion federal investment strategy over five years in “research, development, demonstration, application to analysis and modeling, and other activities with respect to science and technology in artificial intelligence (AI).” The Act’s bi-partisanship nature demonstrates the growing consensus among government officials surrounding the importance of IAI in protecting and bolstering American life against international interference. In order to combat the possibility of the other countries receiving an upper hand in artificial intelligence (AI) technology, the Act strives to engage a diverse realm of American actors (private industries, academic institutions, etc.) in order to win this new arms race.

The proposal is motivated by several different factors, but it is based upon the belief that the United States is falling behind China in IAI, which could threaten the country’s global influence by no longer having a technological advantage. Currently, AI technology is being utilized to support our society in various ways: anticipating consumer demand, mission readiness, crisis management, and much more. Recognizing the influence it has on society, President Donald Trump issued an Executive Order to protect American leadership in IAI. This proposal intends to support the Trump administration’s declaration with material plans by equipping the country’s AI community with government coordination and funding. China is engaging in a similar practice as it strives to “become the world’s premier artificial intelligence innovation center,” which will grant it “new national leadership and establish the key fundamentals for an economic great power.” Senators Heinrich and Portman fear the effects Chinese advancement in IAI will have on society both socially and economically. Heinrich states, “China’s emergence in the AI space poses a grave danger to an ethical, global adoption of standards and uses of these technologies,” while Portman spotlights how because AI is “becoming an intrinsic part of our economy and society,” it must be defended at all costs. The senators and the Trump administration perceive IAI as a vital tool in preserving the American way of life that must be protected against countries with alternative principles.

While it may sound like the U.S. is allocating considerable funds to a potential arms race, advancement in AI systems will ultimately save the country a significant amount of money. Heinrich recognizes how the U.S. “Will never compete with China from a federal spending level,” however, AI allows the country to make targeted investments to keep the U.S. ahead of Chinese development. Specifically, AI successfully contributes to predicting and determining aircraft maintenance. Aircraft maintenance continues to be an expensive military operation as a result of the inability to successfully calculate when upkeep is needed. For instance, researchers studied 10 years of supply data and five years of maintenance reports for the E-3 fleet and discovered 29 percent savings in unplanned scheduled maintenance, while 48 parts were highly likely over maintained. However, the Air Force is starting to utilize “AI-enabled readiness assessments without the need for costly new systems.” AI is beginning to save the military millions by managing the vast amount of data recorded about specific aircraft and determining whether renovation is actually needed.

AI platforms will also be essential in effectively collecting and organizing the escalating amount of information being offered to our country’s analysts in a manageable way. Countries like China and Russia are producing more data than ever, the bulk of which the U.S. has to be able to effectively review for its own security and economic prosperity. Additionally, vital data is not just coming from the Russian and Chinese governments, but also from the country’s private contractors and open source material. Humans cannot efficiently and effectively analyze this extensive amount of data, and therefore, if the U.S. wants to stay ahead of threats, the country must utilize AI.

Besides the utilization of AI, what makes American efforts unique in this new arms race is the country’s desire to involve all Americans. The bill aims to support “collaborative ventures or consortia with public or private sector entities” to bolster research and development. Heinrich notes how R&D investments will occur everywhere, “Whether it’s Silicon Valley, New Mexico or Ohio, or elsewhere across the United States, our high-tech companies, universities, and national laboratories are the foundation by which we lead and maintain an advantage in AI.” The bill seeks collaboration by proposing the creation of a National AI Coordination Office that would lead the government’s efforts and be composed of two advisory committees, “one made up of agency heads and the other of non-government tech experts.” Additionally, because continuous education on AI is essential to maintaining the country’s advantage, the National Science Foundation would receive $100 million per year to create five centers promoting R&D related to AI. Citizens and government officials are all being called upon to help the U.S. stay ahead of other world powers, and therefore, this new arms race is not simply between government actors, but actually between entire populations.

Because the U.S. is relying on the ingenuity of private American institutions to develop IAI capabilities, companies like Praescient Analytics are essential in supporting the country’s efforts. As previously discussed, policy makers recognize that the U.S. does not have the same level of federal spending as a country like China, therefore, it has to make targeted investments. In order to effectively to do so, a company like Praescient is vital in supporting national efforts because of the team’s expertise in dozens of data-analytic platforms that allows it to supply their clientele with customized solutions for their specific problems. Praescient supports the full life cycle of big data deployments, from assessing issues to then guiding U.S. institutions in customizing AI solutions to advance American strategy.

We should not wait for a Chinese equivalent version of Sputnik to occur in AI technology to provoke our competitive edge. By then it will be too late. America thrives because of its people, and the U.S. will only win this new arms race, in IAI, if it effectively utilizes its innovative and determined citizens.