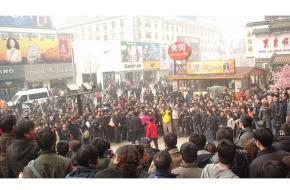 China has the world’s largest Internet user base – 538 million people, more than double the 245 million users in the United States.1 China also has the world’s most active environment for social media – though the many of the social media platforms used around the globe are nowhere to be found – Twitter, Facebook, and YouTube are all blocked by the “The Great Firewall of China.” In their place, Chinese providers have created similar platforms – the most popular, Sina Weibo, a kind of hybrid between Twitter and Facebook, has over 500 million registered users, with 47 million daily users posting 100 million messages every day.2,3,4 Those messages, however, are subject to a system of official censorship the size and sophistication of which some scholars have called unprecedented in history.5

A recent study by a Harvard University scholar found – contrary to conventional wisdom – that the purpose of China’s censorship program is not to suppress criticism of China’s leaders, the government, or its policies, rather, the goal is to restrict the spread of information to reduce the likelihood that a social or political collective action movement will mobilize online. Censoring messages disrupts conversations in the online realm that might inspire the formation of collective action movements – even ones that are supportive of the government’s policies.6 The danger, in the view of China’s leaders, is that even a pro-government movement could transform into an alternative source of authority, information, and identity that could challenge the Communist Party’s monopoly on power.

An Army of Censors

The Chinese leadership’s focus on preventing the emergence of collective action movements and maintaining social stability cannot be overstated. The government relies heavily on domestic security forces to quell large-scale public protests or riots – euphemistically termed “mass incidents,” which one sociologist, Sun Liping, estimated at 180,000 separate incidents across China in 2010. In 2012, the government announced that it planned to spend $111 billion on domestic security, a 12 percent increase over 2011.7 While mass incidents typically erupt in response to local grievances (think corrupt local officials appropriating land for development and not offering fair compensation) – and not against the central government in Beijing – officials are taking no chances that these disparate, local protests could coalesce online into a broader anti-central government movement.

Numbers vary widely, but sources estimate that patrolling Chinese social media are approximately 20,000–50,000 Internet police (wang jing) and Internet monitors (wang guanban) as well as hundreds of thousands of “50 cent party” members (wumao dang) – individuals who are paid to monitor and guide online conversations.8 Censoring messages is a tremendously painstaking activity – censors must manually read and remove objectionable posts that make it through an initial layer of keyword blocking, to catch messages employing metaphor, satire, or other clever phrasing that Chinese netizens have become adept at using.

Approximately 13% of all social media posts in China are censored.9 To test which messages were likely to be censored, the Harvard study divided messages into three categories: (1) critical of the state, (2) supportive of the state, or (3) irrelevant or factual reports about events. Flying in the face of conventional wisdom, tests revealed that messages that were critical of the state were no more likely to be censored than posts which were supportive. However, messages that had “collective action potential,” defined as “representing or threatening group formation,” were highly likely to be censored. In one example, posts expressing support for Chen Fei, an environmental activist and legislator who proposed an environmental lottery in his city to support local environmental protection were censored – even though his efforts are supported by the central government. Chen’s record of organizing collective action around environmental issues was enough to attract the censors’ attention.10 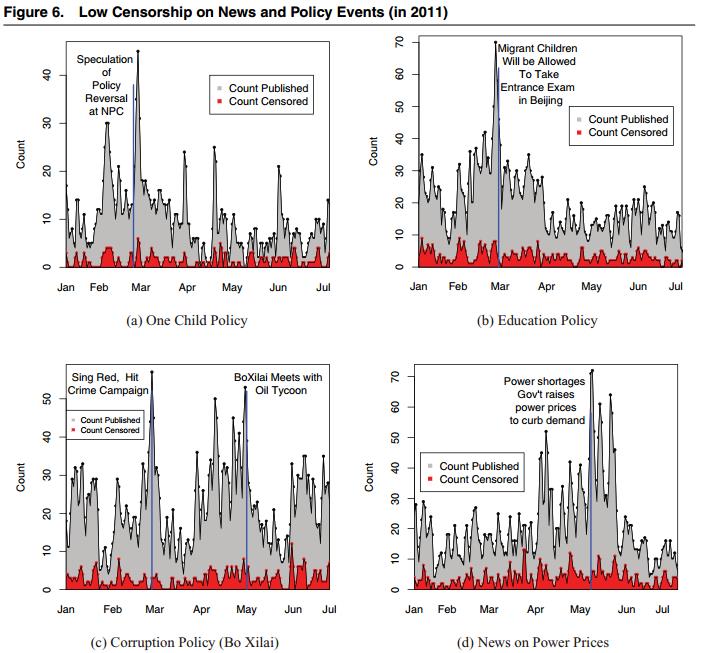 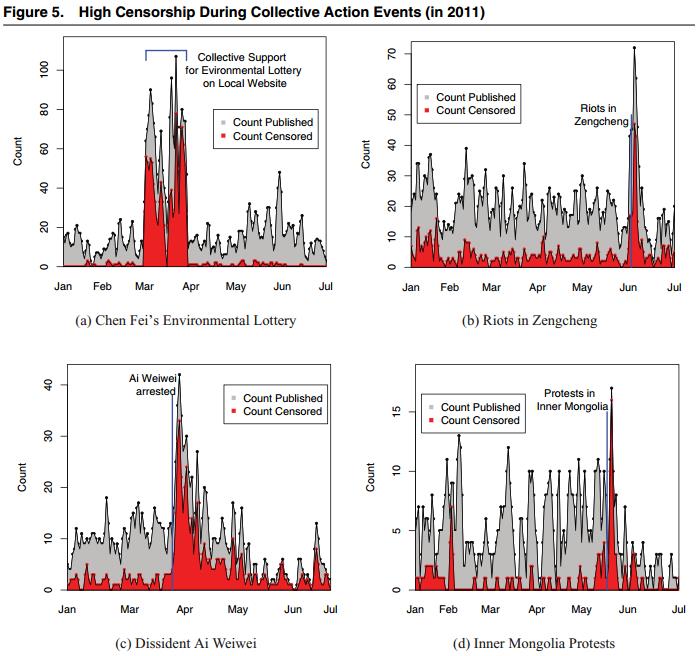