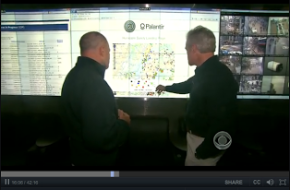 This week Hurricane Sandy tore through the East Coast, hitting New Jersey and New York City especially hard. As first responders and government officials continue to rescue stranded people and restore power and basic services to neighborhoods, various tech companies have stepped in and used Big Data software to gain a better understanding of the storm’s effects and how to best respond to natural disasters. These new technological capabilities are allowing rescue and aid efforts to move forward more effectively than ever before.

Direct Relief International—a non-profit organization that provides medical assistance to people affected by disaster, poverty, and civil arrest in the US and around the world—partnered with Palantir Technologies to designate the most at-risk populations in the path of the storm, prioritize problem areas, and implement a successful and speedy response. Direct Relief used the Palantir platform to assess likely emergency situations and locate medical clinics in flood risk zones so that medical supplies and aid could be effectively distributed to people in need. Additionally, the organization is working with Palantir to integrate and analyze various datasets such as shelter locations and near real-time epidemiological alerts from the Red Cross and government agencies.

Google has also used technology to improve response efforts, provide tools for responders, and help provide critical information in times of natural disaster. For example, the Silicon Valley giant created the “Superstorm Crisis Map,” which is probably the most comprehensive tool available for tracking Hurricane Sandy’s progress and effects. It has the ability to collect, display, and layer weather data as well as depict evacuation routes, emergency centers, and traffic conditions, sometimes using video feeds. Google has also developed technological tools for responders such as Google Public Alerts and Google Person Finder that help expedite internal operations and quickly disseminate information to the public during a crisis. The company has furthermore partnered with NGOs, commercial organizations, and government agencies to find ways to use technology in times of natural havoc. Datum Companies has also launched a catastrophe-prediction platform designed to predict the likelihood of monetary losses associated with natural disasters. The cloud service uses advanced statistical methods and machine learning algorithms to help customers in the insurance industries deal with the aftermath of a destructive natural disaster. The platform has the ability to decompress massive data sets in order to conduct clear, predictive analysis.

Additionally, locals have taken things into their own hands in the aftermath of the storm. The NYC tech community is providing tech-related hurricane assistance to locals and also plans to hold a hackathon later this month focusing on challenges related to the storm. New Yorkers have also used social media and technology to self-organize and distribute aid to fellow city-dwellers still trapped in their apartments without power and supplies. By combining technology and community organizing, these intrepid volunteers are showing up in parts of the city that even the Red Cross and FEMA haven’t reached yet.