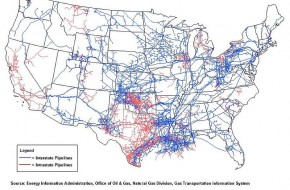 Natural Gas is growing steadily as a viable source of energy across North America, and continued research and development initiatives are generating further investment from stakeholders across the continent. Natural gas burns cleaner than coal and the explosion in unconventional gas reserves in the United States means that we could have approximately a centuries worth of reserves underneath our feet. However, an increased dependence on natural gas is accompanied by an increased dependence on natural gas pipelines. The transport of gas by way of interstate, intrastate, and offshore pipelines is a potential target of bad actors, and the strategies and techniques which could be utilized to attack stations, terminals, government and commercial buildings and private homes poses a security threat to North America’s infrastructure and way of life.

In 2010, two men were convicted of trying to blow up a fuel pipeline running from New Jersey to JFK airport in New York.  In order to empower decision makers across security, financial, transportation, and policy communities, analysts and leaders need to develop and implement a comprehensive approach that efficiently analyzes immense data sets associated with natural gas networks throughout the North American continent. Integrating data from disparate sources and organizing one operational picture will identify weak points that are susceptible to sabotage and/or attack, improve project management at field offices, and enable real-time decision making while also enhancing the capability to detect vulnerabilities such as leaks and prevent disasters.

For example, integrating data collected by field instruments and gathered in Remote Terminal Units (RTUs) will enable analysts to monitor and track the pipeline lifecycle touch points at injection or delivery systems, pump stations (liquid) or compressor stations (gas), and block valve stations. Furthermore, fusing this data with geospatial, relational, and temporal information, including communication systems and/or cellular connections, can provide control of information and assets through one central database and oversight into the methodologies that are being employed to operate and protect natural gas pipelines.

Praescient’s analysts have used the latest software platforms to enhance physical and network security protocols. Advanced analytic software can be integrated with the SCADA System for natural gas pipelines to provide extended functionality across an enterprise and ensure sustainable solutions for protecting the North American continent from strategic security threats in the 21st century.