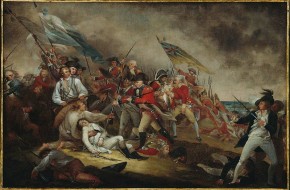 On Thursday, July 4th our nation will celebrate the 237th anniversary of the adoption of the Declaration of Independence. This holiday has become a day for backyard barbecues, fireworks, and neighborhood block parties. Many Americans take advantage of the federal holiday, written into law along with New Year’s Day and Christmas Day during the Forty-First United States Congress in 1870, by taking time off work for extended vacations. Indeed, the July 4th holiday is one of the busiest travel days in the country, with the American Automotive Association predicting that more than 40 Million Americans will travel 50 miles or more from their homes to attend festivities. While the relaxed and celebratory nature of Independence Day should by all means be embraced, it is important to remember the conflict for which the holiday earned its named.

On July 4th, 1776, at the Pennsylvania State House (now Independence Hall) in Philadelphia, fifty-six representatives from the thirteen colonies signed the Declaration of Independence, giving birth to a new and sovereign nation – The United States of America. This declaration was penned by Thomas Jefferson and adopted by his fellow delegates at the Second Continental Congress following decades of expansionist wars, burdensome taxes, protests, and firm political control by the British Crown.

Despite the deep political and symbolic meaning of this proclamation, the bloody struggle for independence continued to ravage the North American continent for another eight years. Battles took

place all over the newly christened nation, with many soldiers giving their lives on both sides of the conflict. At Praescient, we’ve chosen to honor an important American officer who fell in battle with our recurring speaker series known as The Knowlton Project. As you may have read elsewhere on our site, these events are named in honor of Lieutenant Colonel Thomas Knowlton, a man regarded by many to be the first true intelligence professional.

LTC Knowlton began his military career as a teenager in 1755, when he served as a scout for the British Army during the French and Indian War. In just five years, Knowlton was promoted to Lieutenant and went on to fight the Spanish in Cuba on a British expedition. Knowlton then became a prominent statesmen in Connecticut, serving as a Selectman for the the Town of Ashford until the Revolution began in 1775. Upon hearing of the outbreak of war at Lexington and Concord, Knowlton immediately joined the 5th Connecticut Regiment of the colony’s militia to fight on the side of the patriots. He became a decorated leader, achieving distinctions at several important engagements, including the Battle of Bunker Hill. He was remembered by his men for unflappable courage.

General George Washington promoted Knowlton to the rank of Lieutenant Colonel in the late summer of 1776, with instructions to form an elite reconnaissance unit. Known as “Knowlton’s Rangers,” these men, including the famous spy Captain Nathan Hale, were the first official intelligence unit in the United States Army and can be compared to modern day special forces. In September of 1776, the unit encountered unexpected enemy resistance on the island of Manhattan while on a scouting mission in advance of the Battle of Harlem Heights. Suffering a tactical disadvantage, Knowlton’s Rangers nevertheless fought back against their British aggressors. Thomas Knowlton effectively rallied his men, but was was killed during the fighting. Washington mourned the loss of this great officer the next day during his general orders, stating: “The gallant and brave Col Knowlton, … would have been an Honor to any Country, having fallen yesterday, while gloriously fighting …”

Think back to the sacrifice of men like Thomas Knowlton as you celebrate the holiday this week. Remember those that were willing to give their lives, and those who continue to give their lives, so that we all may enjoy “life, liberty, and the pursuit of happiness.” Have a happy and safe Independence Day.