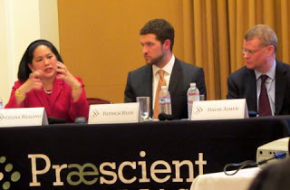 One does not typically associate intimate knowledge of financial systems with protecting national security. Increasingly, that very knowledge is becoming vital to the defense of the United States and its allies. Globalization and rapid advancements in technology have caused groups engaged in armed conflict and terrorism to radically shift their funding methods from direct contributions to a reliance on a complex network of illicit transactions. The line between terrorist and criminal grows ever more blurry as groups deal in the trafficking of cars, drugs, and even human beings. Praescient is committed to applying robust analytical capabilities to combating these threats; we’re proud to partner with some of the finance field’s leading experts to tackle the challenge.

Two of the D.C. area’s top counter threat finance pros joined Praescient Analytics for the second edition of The Knowlton Project on October 9, 2012. Held at the Army and Navy Club on Farragut Square, the evening was host to a series of energetic presentations conducted by Celina Realuyo, an Adjunct Associate Professor at Georgetown University’s Security Studies program, and Dr. David Asher, a Non-Resident Senior Fellow at the Center for a New American Security.  The speakers discussed the global nature of illicit financial networks, shared personal stories of their respective successes working with elements of the law enforcement and national security community, and provided courses of actions to remedy shortcomings within the defense and intelligence communities.

A vigorous round of Q and A opened the discussion up to topics key to making sense of the countermeasures against money laundering and the sale of illegal goods. The speakers and the audience members interagency friction has presented obstacles to success in the realm of counter threat finance. Another vital issue touched upon was the role of technology in conducting analyses and investigations. Guests discussed the  tools and methodologies necessary to gather and analyze relevant information in the fight against illicit networks in an age in which terabytes of data are uploaded to the internet on a constant basis.

As the evening wrapped up, guests left the venue with a greater understanding of this difficult and highly relevant issue. The team at Praescient Analytics is greatly looking forward to hosting the next edition of The Knowlton Project and anticipates another thought-provoking evening of conversation in the near future. Hope to see you there!