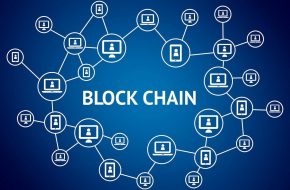 Blockchain is mentioned so frequently when talking about cryptocurrencies such as
Bitcoin that many assume it’s only use is within finance circles. However, blockchain technology is far from one dimensional. Experts predict that it will be of utmost importance for U.S. government officials to have an understanding of the emerging technology, as well as the implications it may have on national security.

As a review, blockchain is a new way to store information that works by treating each piece of information as a “block” that is then added to a “chain” of transactions. Rather than being stored in a central location, data entered into a blockchain is decentralized and sent out across a network of computers, or nodes, for verification. Once verified, the information is added to the chain where a detailed record of the transaction is also stored. The structure of blockchains make the transactions unalterable, easy to trace, and very difficult to forge. For a more detailed explanation of the inner workings of blockchains, head over to our post “What is Blockchain and Why do I care?” published in April 2018.

Currently, blockchain is most commonly used to facilitate cryptocurrency transactions, but it has the potential to record essentially anything of value. While the development of blockchain is expected to help streamline a number of government functions including contract management and information sharing, it is also likely to create new national security threats, specifically in reference to terrorists, criminal organizations, and states looking to circumvent international economic sanctions.

Defense Department contracts is one area where blockchain can really make a difference. With complex new defense systems, many contracts involve intricate and diverse supply chains. There is always the risk that some suppliers may have ties to foreign governments and would be willing to incorporate spyware into the project. Using blockchain, Defense Department auditors could see a detailed record of each piece of technology including who made it, when it was installed, and how it would impact the final product. This unchangeable contract history would make it easier to detect security breaches, and make contracts much safer overall.

Blockchain also has the potential to streamline the way agencies share information. Rather than storing data on a single agency’s server, blockchain would create a decentralized database that could them be accessed by all relevant parties. For example, in a multi-agency criminal investigation, the FBI could add a piece of evidence to the chain, which would then be time stamped, digitally signed, and shared with other investigators like the local police department or other federal organizations. Blockchain would not only make this process more efficient, but could also prevent leaks because only those with proper security clearances would have access to the data. Additionally, the technology keeps a record of who views what information. These are just two of many areas where blockchain could greatly improve security in the government sector.

Focusing on the upsides of this innovative technology is great, but it would be a mistake to not recognize the new challenges it will bring to the IC. One of the greatest concerns is the possible use of blockchain by terrorists and criminal organizations to create autonomous currencies which could make their money laundering operations and fraud much easier.

Experts are also worried that nation states may see this as an opportunity to resist and even get around economic sanctions. Countries who have been targets of sanctions in the past are strategically investing in blockchain. If they can get these technologies to replace the U.S. banking system or the global system, they would become immune to the negative impact of economic sanctions.

While it is no doubt that blockchain has a promising future, it is still ways away from realizing its full potential. By placing itself at the forefront of the development of this technology, the U.S. will be one of the main actors in establishing quality control laws and policy. This position is key in order to maximize benefits and limit negative consequences. It would be wise for U.S. policymakers to invest in blockchain technology now, and not give competing nations the chance to get ahead. Blockchain may only be associated with the financial world for now, but it certainly won’t be for long.