Leveling Up: The Power of the Fraud Triangle

Leveling Up: The Power of the Fraud Triangle 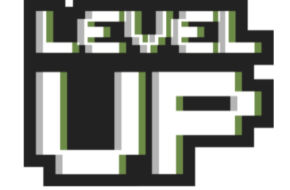 Fraud detection and prevention techniques are constantly evolving. With any type of identification process, there is always room for error. Detection methods have shifted drastically; however, these changes took some time. Initially, detection practices involved manual data matching within excel with a minor progression to batch jobs but they were STILL performed in excel (not to dismiss Excel’s capabilities, but certainly not the most efficient process). As time progressed, data integration improvements allowed for richer databases, but still left much up to interpretation and room for error. Now entering into the vast world that is data science, with the combination of statistical analysis, machine learning, natural language processing, and R&D implementation, methods for detection continue to advance. While these methods advance, big data provides greater holistic representation of the problem, but the awareness of potential indicators before jumping into this data is what enhances tradecraft to enrich the detection process at large. 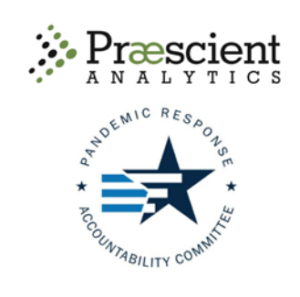 In March of 2020, in response to the immense economic fallout, the Coronavirus Aid, Relief, and Economic Security Act (the CARES act), a $2.2 trillion economic stimulus bill was passed. While this bill provided vast support to many, some viewed this as an opportunity to take advantage of the situation. Team Praescient created a demonstration analyzing loans under the Paycheck Protection Program to begin to uncover patterns of potential fraud. In September of 2021, Praescient was awarded the Blanket Purchase Agreement (BPA) to support the Council of the Inspectors General on Integrity and Efficiency (CIGIE). Praescient provides the ability to identify trends and strategies fraudsters use to manipulate the CARES act. While applying our deep expertise in advanced analytic disciplines and methodologies, knowledge of both psychological and social theories provides a unique lens in initial lead discovery. 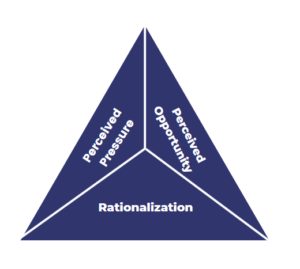 A psychological theory to consider is the Fraud Triangle, a universally accepted concept that students of anti-fraud will inevitably learn about; however, it may not be as widely known to investigators of fraud as the community would expect. The Fraud Triangle can be credited to Donald Cressey and co-author, Edwin Sutherland. The theory was introduced in a 1951 article, “Why Do Trusted Persons Commit Fraud? A Social-Psychological Study of Defalcators”. The Fraud Triangle explains that individuals are motivated to commit fraud when three elements all come together: 1) some kind of perceived pressure 2) some perceived opportunity and 3) some way to rationalize the fraud as being consistent with one’s values. Therefore, the rationale behind this theory is that when an individual has the incentive (i.e., monetary gain), the ability to execute the plan, and the positive attitude towards fraud, they are at a higher-risk for committing fraud activity. The pandemic likely presented the “perceived opportunity” as some individuals felt there was not much oversight to catch them due to the chaos of these unprecedented times. Therefore, the two missing points to address in this case are primarily “perceived pressure” and “rationalization”. As fraud detection methods continue to advance with machine learning, incorporating the fraud triangle is key for efficient analysis.

As mentioned, the Fraud Triangle Model can be credited to Donald Cressey, but components of this theory were derived from the theory of Differential Association by Edwin Sutherland. Sutherland developed the theory of differential association to describe how individuals become criminals, rather than why. Sutherland summarized his theory with nine propositions, which ultimately explain that individuals will become involved in criminal activity if their favorable attitudes toward crime outweigh their negative attitudes towards crime (essentially, the individual is able to justify criminal behavior). Sutherland further explains that the favorable attitudes are learned through prolonged and closely intertwined contact with individuals who are criminals themselves, hence the name “differential association”. Sutherland expounded that it is not merely enough to be in contact with criminals, but that there must be enough association between the two individuals that the criminal definitions and attitudes are successfully conveyed/learned. The explained components of Sutherland’s theory can be found in the rationalization prong of Cressey’s Fraud Triangle, which gives insight into the development of the theory. Interestingly, while Sutherland’s differential association theory was an inspiration to Cressey, years later Cressey’s Fraud Triangle theory became an inspiration to other theorists. 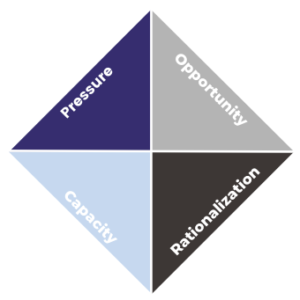 Adding Another Point… the Diamond Theory.

The fraud triangle produced the framework for this next theory, the diamond theory, which adds another point: capacity. Wolfe and Hermanson (2004) developed this theory in 2004 with the additional component to address an individual’s position or function that may create a greater opportunity to exploit and/or successfully carry out fraudulent activity. An individual’s role at a company therefore is also something to consider and interconnects with the discussion of “perceived opportunity”. This theory demonstrates the ever-changing understanding of fraud, but also simultaneously the persisting use and power of the fraud triangle. 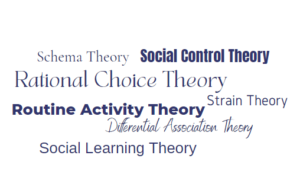 Above: Some theories of criminal behavior are more recognized than others, no theory ever will entirely explain criminal behavior; however, complementary psychosocial and social theories help to produce a more holistic understanding of individuals involved in crime. Praescient does not recognize any single theory on its own.

The Power of the Fraud Triangle…

As discussed in last week’s blog, behavioral science demonstrates its power across many use cases and industries. The forensic psychology perspective allows for greater application of big data and has value when building out fraud indicators. Theories of criminal behavior provide a starting place for analysts to help guide their initial investigation. The data then either confirms or denies this “starting place” allowing for pivots. The power of both quantitative behavioral science and social science is growing as society is recognizing its utility in adapting stronger predictors of behavior. 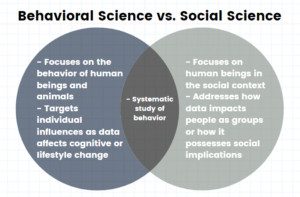