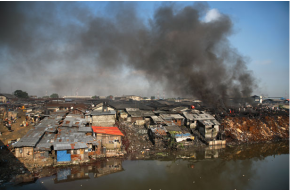 The Niger Delta, the main oil-producing region in Nigeria, has a history of opposition to the central government in Abuja. It began as a non-violent movement led by environmental activist Ken Siro-Wiwa (who was eventually executed by the military dictator Sani Abacha) aimed at seeking redress for the environmental and economic damage that oil extraction had inflicted upon the Delta states in southern Nigeria. In 2005, Dokobu Asari began the first militant organization in the Niger Delta, the Niger Delta People’s Volunteer Force, and launched “Operation Locust Feast”, a flurry of pipeline sabotage and bunkering to steal oil. Following the dissolution of the NDPVF, the remaining militants formed the Movement for the Emancipation of the Niger Delta (MEND).

Once established in 2007, MEND began to terrorize the oil industry in the Niger Delta. They destroyed pipelines, stole oil, kidnapped oil workers and generally wreaked havoc upon the Nigeria’s oil production. At its height between 2007 and 2009, MEND was responsible for the majority of attacks on Nigeria’s oil production facilities, which shut-in approximately 20% of Nigerian oil production. Through kidnapping ransoms, stolen oil sold on the black market, and other illegitimate means, MEND became a lucrative venture for militant leaders. In 2009, then-President Umaru Yar’Adua offered a general amnesty for militants that was nine times as much as the average salary of workers in the Niger Delta, which halted militant attacks as a by-product of MEND leaders receiving monies to not target the oil industry.

Amnesty payments, kidnapping ransoms, and the high profits from stolen oil altered the incentives for Delta militants. Instead of using violence as a political means, young males soon began to engage in rent-seeking behavior, such as taking up arms and kidnapping and/or sabotaging oil pipelines in the name of MEND, in order to secure a slice of the money circulating throughout the Nigerian oil industry. As a result, kidnappings and attacks on oil pipelines have continued into 2012. More importantly, there seems to be more militants ready and willing to step into the vacuum created by retired and wealthy militant leaders, especially in response to monetary compensation. Although the Delta militants maintain their ideological foundation, the movement has grown more de-centralized over time while integrating an entrepreneurial criminal culture that has shaped their tactics and driven their operations.

Nigerian oil is a tempting target for those seeking to make easy money in Nigeria. The oil economy in Nigeria has not only fostered corruption and environmental degradation; it has also become a target for opportunistic militants seeking quick paydays. In the same way that politicians and officials in Nigeria make money through bribes and kickbacks related to the oil industry, militants take their slice through theft and kidnapping, and eventually amnesty payments from the state (which are funded by their oil royalties). Through this rent-seeking behavior, chunks of petroleum money are stolen away from the Nigerian people and cannot be used to sustain community safety, economic development, and food security. In the end, the Delta militants not only contribute to the instability of Nigeria, an important and populous oil producing nation, but also take resources away from the Nigerian people needed to adequately address severe development problems in the Niger Delta and Nigeria as a whole.