The Democratization of Information: Social Media as a Window into War

The Democratization of Information: Social Media as a Window into War 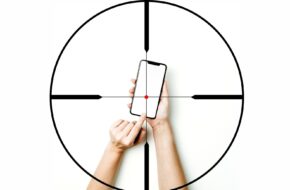 The raising of the American flag on Iwo Jima. Soldiers storming the beaches of Normandy. The Red Army affixing the Soviet flag atop the Reichstag. The execution of Nguyen Van Lem in Saigon during the Tet Offensive. Napalm Girl. These famous photos taken during the heat of war have pulled at the heartstrings of human emotion for decades, often pushing public opinion hard enough to affect change on the way governments went about waging war.

However, these images were particularly notable precisely because their existence was few and far between. In order for regular people and governments to see the horrors of war, they either had to be there themselves or rely on the scarcely available and often curated images provided by trained photographers working with expensive and specialized equipment. Up until the end of the 20th century, information – especially visual – about the day to day occurrences of war was hardly ubiquitous. Particularly before the era of journalism that began with the Vietnam War, citizens had to trust in the shoddy pictures given to them in newspapers, or simply base their judgements off of the voices coming out of their radios. 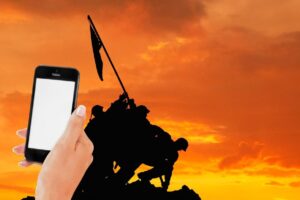 But what if any average person could have captured images of their experience of war and shared them with the world?

Imagine that social media and smartphones existed in 1940. The French Resistance would have been able to use free flowing information to better resist occupation forces from the inside via improved grassroots organizing. Allied intelligence would have been able to use publicly available cell phone videos to anticipate Axis troop movements better and minimize casualties. And the tragedies of the Holocaust would have inevitably been revealed to the world’s citizenry much sooner, saving the lives of millions of innocent men, women, and children. The power of easily disseminated information quickly becomes obvious.

Social Media in the Current Landscape

Fast forward to today’s Russian invasion of Ukraine – this technological hypothetical from the past is now reality. Everyday Ukrainians can now document the horrors they are facing by snapping a picture on their phone and sending it off in a 280 character tweet, instantly making their reality accessible to anyone with access to a computer and the internet. Ukrainian President Volodomyr Zelenskyy refutes Russian claims that he has fled the country by simply recording a video of himself and putting it online, or posting on his official Twitter account what he wants the international community to hear.

The advent of social media has had many effects, but one of the most potent is it has shrunk the world, and made the farthest reaches of the globe accessible from the palm of one’s hand. This is extremely evident in war, where the dissemination of information has been democratized; the citizen activist is now able to procure evidence potentially just as credible as that of governments or media institutions.

So What? Social media as a Source of Analysis

In short, the possibilities for utilizing open-source intelligence, or OSINT, abound. There are many ways people can take advantage of the mountain of information available in the public domain. Once again, let’s use Twitter and the current conflict in Ukraine as an example.

For one, analysts with military backgrounds are able to glean an immense amount of information from the imagery and footage of downed or abandoned Russian military equipment. By combining evidence of Russian troop presence with geo-data, either in the form of metadata or information specified in the text of the Tweet, analysts can determine a set of facts not being shared by traditional news sources. Put together enough of these facts, and a surprisingly accurate picture of developments on the ground can start to be painted, even from thousands of miles away. Military-minded analysis of social media was also useful before the conflict began: Russian soldiers notoriously were quick to post short videos of their quarters and free-time activities on Tik Tok when they were positioned along Ukraine’s borders for what the Kremlin termed “military exercises.” By examining these seemingly innocent videos, those with background knowledge on Russian military equipment and uniform markings were able to determine what types of units were where, and therefore what capabilities Russia was truly positioned to use in the event of an invasion.

This kind of social media analysis can be a super useful tool for those working on the humanitarian side of conflict. For example, Russian news outlets have been insistent that Ukrainian civilian infrastructure, such as housing and schools, are not being targeted by air strikes. However, regular Ukrainian citizens are posting photos and videos of bombed out neighborhood buildings, and reports of civilian casualties abound on social media. By taking into account this type of information, non governmental organizations can account for damage that isn’t able to be reported on as thoroughly by traditional news outlets. 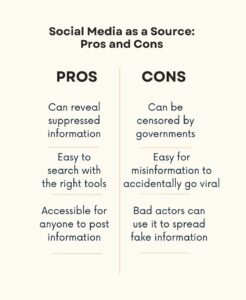 Source Characterization… Of course, one has to be much more mindful of what sources to trust when consulting social media. Source characterization is a vital step to deduce any real judgments, even from a traditional news outlet, but is especially critical when evaluating the credibility of Twitter postings. Unique information can be obtained from social media, but if misinformation is used, it can jeopardize the credibility of all the analysis being conducted.

A Look Into Tools Praescient Leverages for Social Media Analysis

One novel technology Praescient Analytics uses to analyze Publicly Available Information (PAI), including from social media, is Sintelix. Sintelix uses natural language processing (NLP) to extract value from web sources, allowing analysts to comb through mountains of data in very little time. Using the Harvester capability, this feature enables analysts to bring PAI into the platform to conduct sentiment, link, and temporal analysis, which can be applied to uncover insights into situations exactly like the one Ukraine is facing right now. For example, if the Russian government is making a claim that civilian infrastructure was not damaged in an attack, but Sintelix catalogs countless mentions of a certain structure being destroyed on Twitter, then judgments can be made on the veracity of that Russian information. Click here to learn more about Sintelix and the other technologies Praescient uses.

The opportunities made possible by the spread of information on social media is boundless. It imposes limits on efforts to conceal the truth by malevolent actors, enables those in trouble to get help sooner, and allows analysts like those at Praescient to make more nuanced judgments about events. Messaging with friends on Facebook is definitely enjoyable, but benefits from this new era extend far beyond entertaining communication. The democratization of information during war that social media causes has implications far beyond anything people could have imagined a century ago.

Praescient’s research analysts are currently tracking the war in Ukraine using various methods – including social media analysis as outlined here. Stay tuned in a couple weeks for a blog series highlighting the project.