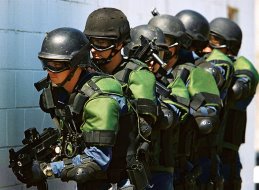 In the years since September 11th, the amount of money the United States has spent on counterterrorism programs has dramatically increased— both in the government and in the private sector.  With all the resources that we have invested in countering terrorism it is important to be able to assess the effectiveness of these programs. Despite the attention this issue has received in academic and policy circles it is still very difficult to answer the question: Is a given counterterrorism program effective?

There are (at least) four challenges to that need to be addressed in order to improve our ability to assess the effectiveness of counterterrorism programs. First, counterterrorism is a very broad term and it can be difficult to determine what counts as a counter-terrorist action.

Third, even simply defining “success” in the context of counterterrorism interventions is tough. Decrease in terrorist incident frequency, reduction in fatalities per attack, changing patterns of societal resilience, changes in recruitment patterns and specific programmatic success are just some of the ways that analysts have attempted to capture some aspect of counterterrorism effectiveness.

We at Praescient Analytics, working with the Palantir platform, are pushing the frontier in developing innovative analytical methods to help us sort through the challenges of assessing the effectiveness of counterterrorism programs. Ultimately, our analytical advancements enable us to better model the impact counterterrorism measures have on a given terrorist organization.

Similarly, the type of incident a terrorist group uses can tell us something about its operational capability. A gun or grenade attack executed by a single terrorist operative requires significantly less planning, money and even technological capabilities than a series of well-coordinated large vehicle based improvised explosive devices (VBIEDs). Thus, by extension, when we see a terrorist group that was once able to pull off large sophisticated incidents begin to use small isolated incidents, it is likely that their operational capability has diminished. Conversely, a group that has started using increasingly complex means of attack is likely increasing its operational capabilities. To be sure, there are a variety of factors at play here, and these examples are only meant to highlight some of the ways of assessing counterterrorism effectiveness by modeling a terrorist group’s capabilities.